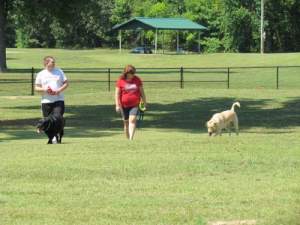 In 2010, the public fundraising began for a dog park at Stuart Nelson Park, located off Park Avenue a few miles west of Noble Park. The City challenged the public to raise $20,000 toward the Paducah Dog Park and then the City would match that amount. Parks Services Director Mark Thompson says 85 different donors contributed to the park. Fundraising Opportunities >> An official opening ceremony was held Wednesday, August 15, 2012. The dog park is on an approximately 7-acre tract of land at the eastern end of Stuart Nelson Park. As you enter Stuart Nelson Park, the dog park is on the right side with the large dog park closest to the park entrance. The park has two large fenced areas for large dogs and small dogs in addition to parking, water, and shelters.

Amenities, Hours, and Rules
The Paducah Dog Park has water, fencing, shelters, gravel parking, and pet waste receptacles. The park is partitioned into two sections based upon the weight of a dog with 30 pounds as the dividing weight. Each fenced section has a water spigot that has a motion sensor on it to detect when a dog is near. Near the entrance of each fenced area is a green box with "Mutt Mitts", degradable bags to allow the easy collection of your dog’s excrement. Each fenced area also has a large shelter so that owners can sit and chat while the pooches play and romp. The fencing is coated with black vinyl to keep it looking new for years. In the future, the dog park could have amenities such as dog agility obstacles.

The Paducah Dog Park is open seven days a week during the normal hours for Stuart Nelson Park, 6 a.m. until 9 p.m.

The rules are as follows:

Please login or register to add your review.