A Case for the Big Black Dog (or BBD) 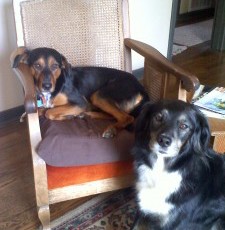 A DogGeek.com exclusive by Teresa Barker

It’s a well known fact in the animal shelter community that black-coated medium to large dogs are the hardest to adopt. They are also the first to be euthanized in animal shelters, where they are assumed “unadoptable.” As the mother of 2 Big Black Dogs (BBDs), this is disturbing news. Whether it is due to superstition, misplaced fear, negative association or otherwise, the only cure for this malady (called Black Dog Syndrome) is education!

Mahatma Ghandi said, “Gentleness, Self-Sacrifice, and Generosity are the exclusive possession of no one race or religion.” and that goes for dogs, too!

A dog’s temperament has absolutely nothing to do with the color of its fur. Dogs become aggressive as a result of abuse, neglect, and improper training, all usually a result of human error. Every dog, no matter its color, is a product of its environment, just like humans. Sure, there may be a slight genetic predisposition for certain personality-types (think: the crazy-hyper Dalmation) but dogs are highly intelligent beings and very trainable. Take, for example, my 2 BBDs. Completely different personalities! One is a black collie mix (a girl, Trixie) who is smarter, faster, stronger and more agile than her BBD brother (Briley, named after the freeway I found him on) who is half her age. Briley is a complete mush, snuggle bug, and wants to be lounging or playing fetch at all times. They were both raised in the same environment, but have distinctly different personalities.

“Humanity has the stars in its future, and that future is too important to be lost under the burden of juvenile folly and ignorant superstition.” ~Isaac Asimov

A black dog is no more a representative of the devil than a white dog is of an angel! From British folklore to symbolizing mental illness, black dogs have historically been used to conjure images of negativity and darkness. Winston Churchill frequently referenced his manic depression, which he referred to as his “black dog” in his writings. Even Led Zeppelin referenced the black dog folklore of the British Isles with the lyrics “Eyes that shine burning red” in a song that was innocently titled after a nameless black lab roaming the recording studio. It’s time to break the cycle of using these lovely animals as a symbol of darkness and deamons. Black is beautiful!

Healthy black dogs have beautiful shining coats that glisten in the sunshine. Their fur also hides dirt well and can be accessorized with any colored collar. Black isn’t just black, there’s various hues within black. I’ve recently noticed that Trixie has a distinct purple-black hue, while Briley is a black and tan. Also, BBDs are often adopted for a smaller fee than other dogs (sad) due to the abundant lack of interest by families looking to adopt. Often, if you adopt a black dog, you can become part of a black dog-lovers club, and might even get a free t-shirt!

Now that you have the information, it’s up to you to choose how you use it. If you are fortunate enough to have a BBD in your family, hug them extra close today. If you see someone walking a BBD, stop to tell them how handsome or beautiful his or her dog is. And, if you’re thinking about adopting a rescue dog, go for the under-underdog….a BBD from a shelter!

Find an animal shelter or dog rescue near you >>