» Dog Health News » Is It OK for My Pets to Eat Pests?

Is It OK for My Pets to Eat Pests?

Comments Off on Is It OK for My Pets to Eat Pests? 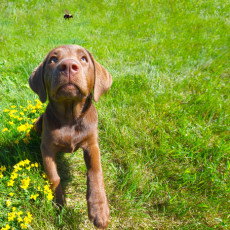 As most dog owners know quite well, pooches of all shapes and sizes seem to have a natural affinity for anything in the yard with six or eight legs. While watching a young pup happily hopping around trying to catch a fly provides us some entertainment, we might wonder if eating said fly is a problem for our beloved four-legged friend.

While an occasional fly is probably not harmful, the following bugs and arachnids should not be considered as safe snack foods for dogs:

Dogs seem to love crunching—yuck—on big insects like cockroaches, Dogcare notes. While these insects might not be poisonous on their own, their bodies may contain traces of bug poison. For example, if the roach has recently visited a bait station, its body might contain poison that could be harmful for your pet. Even if you don’t use this type of product, your neighbors might—and their toxic roaches might end up in your yard.

In addition, these insects have very hard exoskeletons that can get stuck in your dog’s throat or irritate its gastrointestinal tract. To prevent cockroaches from making themselves at home, Waltham Services suggests keeping your home as clean and free of food debris as possible and sealing up cracks near and around the sinks and light fixtures.

Also known as May beetles or June beetles, these brownish insects are a favorite snack of many dogs. While June bugs are not inherently toxic, pooches who eat too many of them will probably get an upset stomach, and then vomit or have diarrhea, states Pawnation.

Like cockroaches, June bugs can be contaminated with poisons like DDT and Lindane. To prevent your dog from getting ahold of these flying insects, keep a sharp eye out when you are outside on summer evenings, and try to keep your pooch away from lights where June bugs love to hang out.

Dogs who think they are chasing a fly only to chomp down on an angry bee often learn the hard way that these yellow and black flying insects should be left alone. As Bulldogs World notes, bee stings can be very painful for dogs. If your dog is stung, carefully remove the stinger from his or her mouth or snout. Instead of using tweezers, which can push more venom into the skin, try to quickly scrape it off with a credit card. Once the stinger is out, soothe the area by wiping it down with water mixed with a little baking soda.

If the snout or nose starts to swell up, apply an ice pack for five minutes. While many dogs endure painful bee stings with no lasting effects, keep a close eye on your pooch, and give your vet a call right away if he or she has any trouble breathing or seems to be in a lot of pain.

Like flies and bees, moths can be a lot of fun for dogs to chase and catch. Some moths naturally contain awful-tasting compounds that discourage animals from eating anything that resembles them, explains Tend Life. However, these noxious substances are probably not enough to get a dog sick. In the case of smaller dogs, it’s probably best to discourage them from eating moths because the wings might get stuck in their throat.